I may or may not have added a massive list of things to work on for Three Pixels.

Almost all of it is done already.

I think my list had about 20 items on it at one point. But I could not work this Wednesday so I put about eight hours into programming. So hang onto your seats because there is a lot of new stuff.

A few things have changed

As you can see I made the background much darker (I did experiment with pure black but ended up going with a very dark grey). It makes the game more playable and looks far better 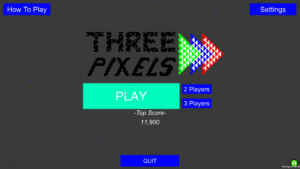 You may notice that the buttons and logo are larger now. I did some work on getting all the UI in the proper scale and it makes a huge difference. The “How to Play” and “Settings” buttons are larger and now have text instead of a symbol on them. If you look at the screenshots below you will notice that the score and player health UI is much more readable now. (also I added a wave count under the score) 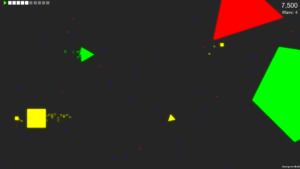 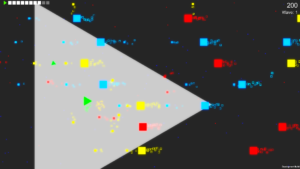 If you missed it there are two new types of enemies in the game. If you look at the last two screenshots you can see both large and small yellow enemies. They both have a new weapon type that shoots a bullet that then shoots out more bullets. The small one shoots one straight up and one straight down, the large shoots out six evenly spaced bullets. For those counting that is a 50% increase in the different types of enemies in the game.

Ok so bonus points have been in the game for a long time. I did not communicate that very well however (I even forgot to explain it in the how to play level) so I did a ton of work to make it much more noticeable when you get a bonus. Before all that happened was that a small icon was displayed next to the score for a while if you met the criteria for bonus points (take no damage during a wave and/or destroy all enemies in a wave) but nobody really noticed them and when I explained what they were (something your not supposed to do when someone is testing your game) they seemed to still not quite understand. To fix this I made several changes.

End result is that it becomes very hard to miss when you get bonus points.

There is also a new powerup. You may see a purple powerup float onto the screen at some point, if you pick it up you will then be able to shoot three bullets with every button press for a short time.

OK so a few other things may have been change as well but I will leave that for next week’s update. See you then!