So if you were wondering what I would add to my todo list next, here it is.

It has not been as bad a I thought it would be. I changed the script that sets up the waves so that every set number of wave is a boss fight so the game does not move on until you die or defeat the boss. I have a script that generates a boss with three phases each with a random moveset and a random weapon. It works. It just needs about a dozen variations made of all the different components, which is not a lot of fun to make (for me anyway). But it will hopefully get done this week. Possibly this is the last big thing I will add to Three Pixels, after this I plan on adding a few small features and then being done. It may be the first project that I worked on that is actually better than what I dreamed up, it also took several months longer than planned but it always does.

It might be a good idea to explain how the random boss system works.

The boss has phases (I am using three but it’s flexible). Each phase has a list of possible movesets (so I can limit certain patterns to a specific phase). Once it picks a pattern that moveset has a list of weapon systems that will work well with that particular pattern and it picks one of those. When the boss starts in it spawns phase one, when phase one is out of health points it destroys it and spawns phase two and the same for phase three.

This is a quick look at a basic pattern I made for the boss. It’s simple but I like how it works when you play. 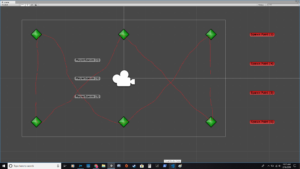 Well that is all for now. See you next time!